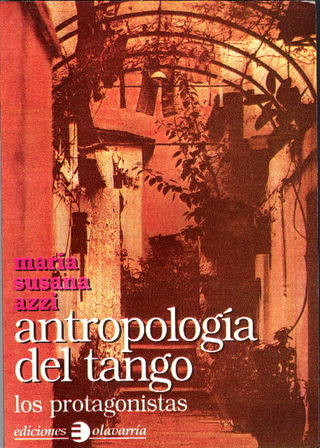 Tango cultural studies. The tango provided thousands of European immigrants a common platform, an identity, a culture where they were able to meet people, to relate, to interact. It also became a way to express bitter nostalgia for the country they'd left behind and disenchantment with their new home. This book is divided into two sections: the tango in Buenos Aires and the tango in Olavarría, a mid-Pampas town in Argentina. The voices of various protagonists have been transcribed and edited so as to show the richness of the tango world, which is very powerful, with strong personalities. Dancers are so different from musicians and bandoneonists from violinists and singers. You can tell what they do by the way they walk. Musicians never know how to dance. Poets and singers, many from Italy and opera-loving Naples, created dramas without happy endings. "The man the tango sings about is a loser haunted by failure", Azzi says. "In the tango, a man is trapped. Stuck in his barrio, a failure, unable to leave, he complains, as in 'Quejas de Bandoneón'. Time has flown by. Living in the past, he remembers and longs for what is no longer there". The language of dancing feet is different: sensuous, dynamic, light. "There is an explosion of happiness when you dance well," Azzi says. "The pathos of the lyrics touches the inner being, while the dancing is a way of moving particular to this culture and a negotiation of space. The female negotiates for herself and the male for the couple. His viewpoint is, 'This is my space, our space, and it should not be invaded'". Will Argentines continue to feel identified with the "tragic ending that was the destiny of this nation for decades?" she wonders. But if younger Argentines write drastically different lyrics, leaving behind a gloomy state of the soul the old tangos depict, "would that be a tango?"

What does the tango means to Pepito Avellaneda?
"I started dancing at twelve at the Carnival celebrations in Avellaneda. My true name is Monteleone; "Pepito Avellaneda" is a nickname. My ancestors were Italians and Spaniards. I used to go to dance to the Salón Duca, in the 40s, 1945, 1946. I started to dance, I dared to dance. In 1945 I made my first exhibition: it was at the Teatro Roma of Avellaneda. I was fifteen years old then. I danced with Royuelo's daughter, a muscle therapist at Independiente club. We even now still meet, she is now married, she has children. I'm a close friend of her husband, very close friend. They used to go dancing to 'Tanguería del 40', in Lanús. Nice isn't it? Because it is a memory of years, years.

"Dancing is everything for me, I feed on it. I dance and I am nurtured. I signed many contracts, for example in the provinces: Salta, Córdoba, Tucumán. And I, even though I was not paid, I danced because I felt it. That is to say I did what I felt like to and I was also paid. That is wonderful. It means that I feed on tango, I enjoy teaching. I spend all day long teaching. In Europe they love me very much. So much so that I receive letters, they send me invitations, it's very nice.

"I am pizzero. My trade is to sell pizza. We had a pizza shop with daddy, but I was crazy for milonga (dancing). No, no, no...I wanted to work like that. Only with dancing. When would I find time to sleep? When it was the time of the Carnival celebrations, people at clubs ordered pizza, I delivered pizza, I stayed there to dance until the next day, I went back home at six in the morning and then I started to get pizza ready for the following day. It was Carnival time. That is to say that I did not sleep. Sometimes daddy told me: 'Come on, lie down for a while that I wake you up later'. My old man was my friend, my brother, everything... I lost my Mom at five. He meant everything for me. I lost him three years ago. Certainly, I'm from Avellaneda. But the boys, as I danced with the name 'Los Porteñitos', told me 'but how d'you represent the capital if you're from the province?'. Then I told my manager about that and he called me 'Pepito from Avellaneda'. 'You go to Mataderos, to Flores, Pepito from Avellaneda, it sounds good'. 'No, Pepito Avellaneda'. I sounds like a surname. And so it's been from long since. I think I made it popular in 1957 or 58. I still keep paper clippings of that. I'd like to show you. I worked hard in live shows. When there was a live show, I used to go and danced at the cinemas, between the movies, there was a live show. I have programs of the '55, '56. It's incredible. The magazine 'Ahora', of the '57. I was looking after in old magazines, and then I start to see one and there I was. It's incredible. I've been with tango for a long time, with teaching."

Le Grand Tango: The Life and Music of Astor Piazzolla
"A remarkable document about the life and music of the Argentine master of the bandoneón."
--Lalo Schifrin

"The Golden Age and After" in ¡Tango!
"Truly magnificent...one of the best books on tango ever published in English."
--Buenos Aires Herald