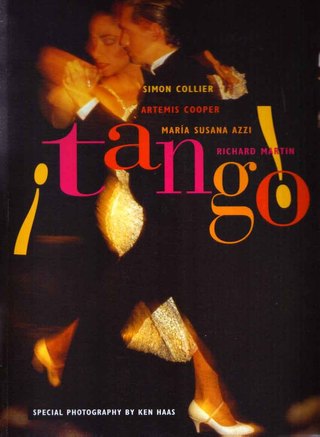 "The Golden Age and After" in ¡Tango!

Born in the slums of Buenos Aires in the last decades of the nineteenth century, the tango--the most erotic, most passionate, most melancholy of dances--has remained spectacularly alive for more than a hundred years. Today it is the focus of a new cult, casting its spell throughout the Americas, Europe, the Pacific basin, and Japan. What is the secret of the tango's appeal? In ¡Tango!, four experts from Europe, North America, and Latin America explore its fascinating history from the earliest beginnings to the present. Historian Simon Collier traces the tango's roots in Argentina and charts its rise from the brothels of Buenos Aires to become the quintessential expression of Argentine popular culture. The writer Artemis Cooper discusses the amazing tango craze of the 1910s in Europe and North America, while anthropologist María Susana Azzi looks at the tango's peak years in Argentina, the period from 1920 to 1950. Finally, Richard Martin, Curator at the Costume Institute at the Metropolitan Museum of Art in New York, charts the international boom in the tango's popularity in recent times. He looks, too, at the relationship of woman to man and man to woman in the tango. To match the spectacle of the tango, the book is illustrated with more than 250 photographs and drawings in color and black and white. Special features are built around the brilliant color photography of Ken Haas, recognized worldwide for his fidelity to the spirit of the dance. And as an evocative reminder of the rhythms of the dance, some of the most celebrated tango songs are discussed and quoted.

Born in the slums of Buenos Aires in the last decades of the 19th century, the tango has survived for more than a hundred years. Today it is the focus of a new cult in the Americas, Europe, the Pacific basin and Japan. In this book, four experts on the dance from Europe, North America and Latin America explore the history of the tango from its beginnings to the present day. Its roots are traced to Argentina and its rise from the brothels of Buenos Aires is charted. The tango craze of the early 20th century in Europe and North America is discussed, along with the dance's peak years in Argentina between 1920 and 1940. Finally, the popularity of the dance in recent times is assessed, looking at the wider arena of literature, films and the arts. The book also contains the lyrics of some of the most celebrated tango songs, with a list of CDs available.

Born in the slums of Buenos Aires in the last decade of the 19th century, the tango--the dance of love and death--has remained spectacularly alive for more than 100 years. What is the secret of the tango's unique emotional appeal? In this book, a group of experts explores its complex and fascinating history, showing how the tango developed into the quintessential expression of Argentine popular culture. 260 illustrations, 80 in color. (Ingram)

"Everything you always wanted to know about the dance and its origins--and then some."

"The tango smacks of elegance and sophistication, but that was not always the case. The tango was born in the lesser quarters of Buenos Aires in the late nineteenth century, first danced by prostitutes and pimps, and took years to win the 'battle for social acceptability.' This unbridled dance is chronicled in a book that is equally unrestrained, abounding in exciting illustrations and grounded in a lively text by four authorities. In the 1880s, as we learn here, an economic boom sent Argentina zooming to the top ranks of wealthy nations, and its capital was transformed into a beautiful metropolis, but the city also played host to thousands of European immigrants whose lives were not lived in beauty. In this less-than-respectable ambience sprouted a new and very sexy dance; the 'connection between the tango and the brothel is inescapable.' It took the tango's transfer across the Atlantic to Paris in the years immediately prior to World War I to render it not only respectable but chic. Back to Buenos Aires it came, and in the 1930s, not only the dance but the musical form associated with it enjoyed a golden age; the authors profile the famous singers and dancers who emerged during that flamboyant era. The tango lives on, for according to the authors, 'There will never be a last tango.'"

Le Grand Tango: The Life and Music of Astor Piazzolla
"A remarkable document about the life and music of the Argentine master of the bandoneón."
--Lalo Schifrin

"The Golden Age and After" in ¡Tango!
"Truly magnificent...one of the best books on tango ever published in English."
--Buenos Aires Herald